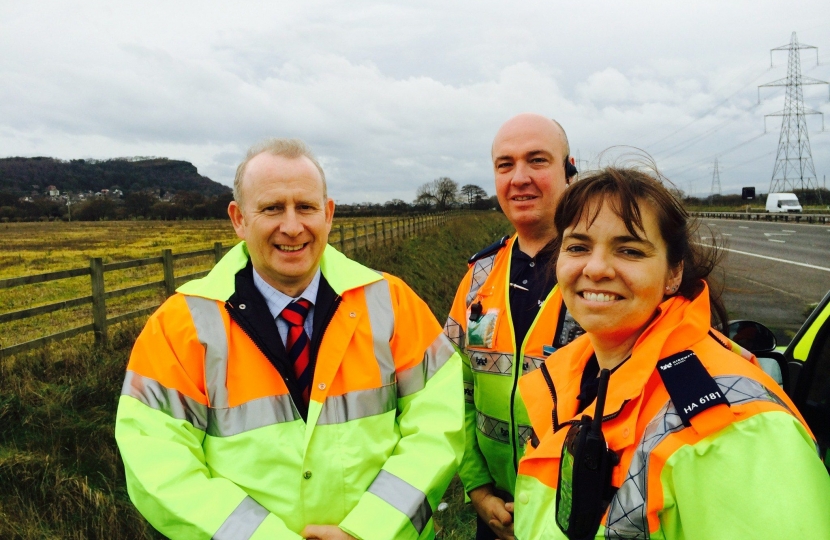 "I have very serious concerns about safety between Junctions 12 - 14 – it is long, flat and with very little technology or electronic signposting alerting drivers to potential hazards ahead.  Also, as a predominantly east-west motorway, the setting sun can have knock on safety implications, making it extremely difficult for drivers to see. This is especially true during autumn and winter when the sun is lower in the sky. In the last 12 – 18 months there have been a number of incidents, sadly some extremely serious, which have had a devastating effect on the local community."

In October Graham held a multi-agency meeting with senior representatives of Highways England, Cheshire Police, Mersey Gateway, Halton Borough Council and Cheshire West and Chester Council to discuss these safety issues.  In addition, Graham also secured and spoke in a debate in Parliament about the M56 to raise this issue at the highest level.

"I believe that “Smart Motorway” technology, with electronic signposting along this stretch of the M56 will help ensure driver safety," said Graham, "And I will continue to lobby hard to make this motorway safer."

If you believe that something needs to be done about the M56 and support Graham’s campaign for a Safer M56, please contact Graham by emailing SaferM56@grahamevans.org.uk

Graham writes to the Minister demanding action on the M56

Graham continues to lobby for action on the M56

Response from Dept of Transport

Graham hears back from Department of Transport

Graham writes again to the Department of Transport

Debate secured in my #SaferM56 Campaign!

I have serious concerns about the safety of the M56, particularly between junctions 12 and 14.

Graham calls for greater safety measures on the M56