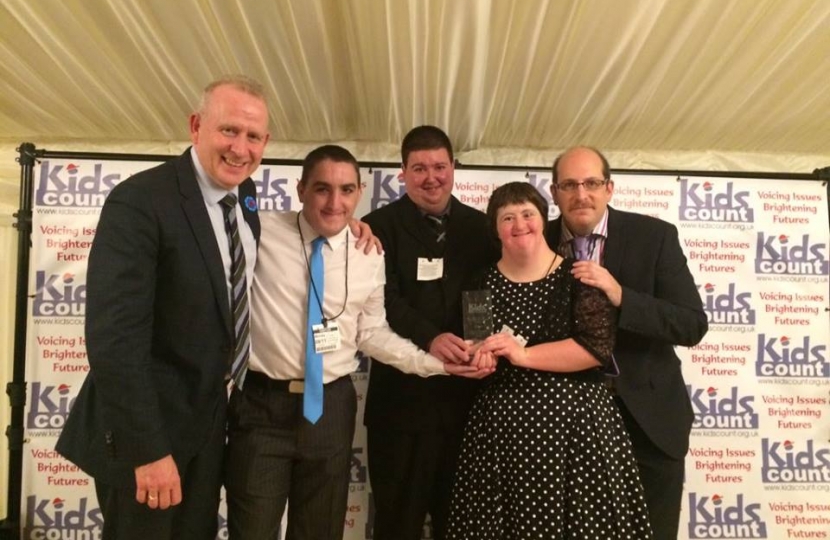 A Northwich-based voluntary organisation was recognised by MPs at the Kids Count Inspiration Awards Ceremony at the House of Commons on Monday evening where it won the “Darren Campbell Positive Sports Award”.

“I know what a huge difference this club makes to the lives of its members, and to the wider community,” said Graham. “I was very pleased to nominate them, and even more pleased that they won this award, and are being recognised in this way. It’s worth remembering that this club is entirely voluntary and therefore I see this award as also recognising all the adults involved under Manger, Ann Calvert’s excellent and inspirational leadership.’

The Cheshire Penguins are a swimming club that have been providing support for young people with disabilities for over 30 years. Each year Cheshire Penguins compete in more than 20 events across the UK. The success of the group has been demonstrated on a nationwide scale, with members previously representing the North West at the Annual Summer Games, and being part of the Great British team at the European and World Downs Championships. The group was presented with their Award by Northwich MP Graham Evans, who nominated them, in the presence of a number of leading politicians, Government Ministers, community heroes and other high achieving young people from across the UK

"The club provides a wide-range of opportunities,” continued Graham, “including helping their members to achieve independence, socialise within a large group of athletes, and develop the confidence to take part in competitive sport. The group is a real lifeline for its members and is a huge asset to the community.”

Chief Penguins Coach, Chris Gourdji said: “‘It’s a great honour for the club to be recognised and invited to such a prestigious event, almost a fairy-tale.  Obviously we are indebted to Mr Graham Evans MP for the nomination, and most of all we are indebted to our Manager, Anne, for all her commitment’.

During the 9th Annual Kids Count Inspiration Awards Evening, MP’s came together to recognise and support some truly inspiration young people and community organisations. This year there was a record number of nominations received for individuals and groups who are addressing issues that affect the lives of children by creating initiatives that are grounded in practicality and realism, make a positive difference, and afford greater freedom to young people to determine their own futures.

Kids Count Chairman, Richard Stephenson , said: “We’re delighted to recognise the significant achievements of Cheshire Penguins at the Kids Count Inspiration Awards and will be keen to learn about the future results of their continued dedication and efforts in Cheshire. I am very proud to be part of an organisation that not only brings young people to the heart of decision making in Westminster, but that also aims to recognise their contribution to society through these Inspiration Awards.