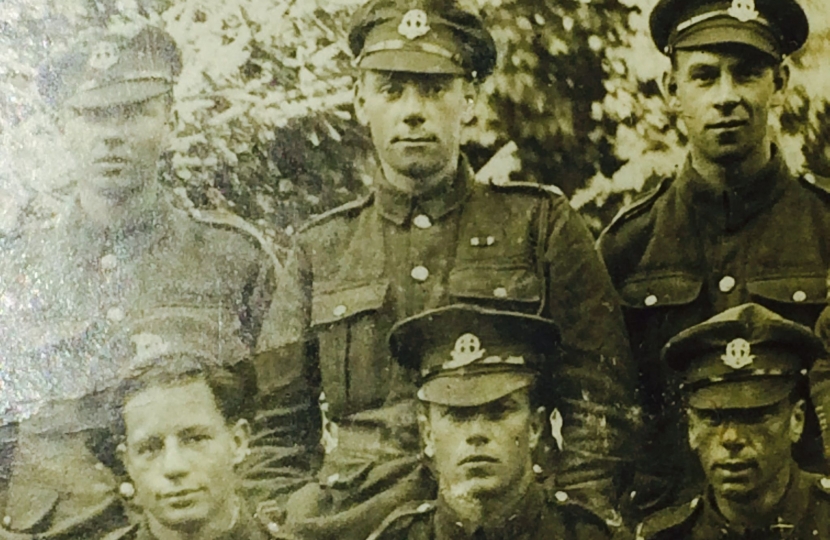 As Britain prepares to fall silent on the 11th hour of the 11th day of the 11th month when we will remember all those who paid the ultimate price for their country, I want to write some of what remembrance means to me. At services across the nation, we will remember. We remember collectively the loss of all our fallen, but families up and down the land will also remember individuals – brothers, sisters, fathers, daughters, fiancés, husbands, grandfathers who died for their country.

100 years ago, we were a year into the Great War with hundreds of thousands of young men already lost on Europe’s battlefields, and three long torturous years until peace. And since then, we have seen more conflict with the Second World War and of course more recently in Iraq and Afghanistan.

On Remembrance Day, I particularly remember my Grandad Jack who served in WW1 as a Lewis Gunner in the Middlesex Regiment, but I also remember Grandad’s son who was killed with his Royal Air Force Halifax Bomber crew of 7 while supporting the Normandy landings during WW2. The crew lie together in a Normandy churchyard, the youngest just 20, the eldest 28. Grandad Jack never got over the loss of his son, and I know that it’s the same for so many families across Britain whether the loss happened decades ago, or far more recently. Throughout the year though, I also try to honour our heroes in other ways, and next year’s London Marathon I shall be running for the charity Care after Combat which helps veterans and their families live a life after military service.

For those in our own country whose loved one has died in service to our nation, every single day is a painful reminder of what they have lost. With first hand recollection of the Great War now gone forever, and those veterans of WW2 growing older it is more important than ever  for us to share the realities of the Great War and subsequent conflicts with the next generation. Indeed, I feel it is our duty to educate future generations about our forebears’ sacrifices. I am a great supporter of the Holocaust Memorial Trust which works to ensure that the Holocaust does not become a distant memory. In conjunction with this Trust, I have taken groups of local school children to visit Auschwitz to see for themselves the horrors which took place there, and they in turn come back and share that experience with their classmates. I believe that those who fail to learn the lessons of history, risk repeating them. The symbol of the poppy is worn with pride by so many in our country to remember all those who have died, and to ensure their loss is never forgotten.

The poppy is a symbol of our remembrance, but one of the most distinctive sounds of our remembrance is the playing of the Last Post on a solo bugle – a humble bugle rather than the ceremonial splendour of state trumpeters. That first Armistice day in 1919, where crowds flocked to London’s cenotaph, it was not to celebrate a glorious victory, but to remember with the utmost solemnity and dignity, their fallen. This feeling continues to this day, and I am proud that our determination to remember our country’s heroes in a dignified and quintessentially British manner remains undimmed. At the going down of the sun and in the morning, We will remember them.