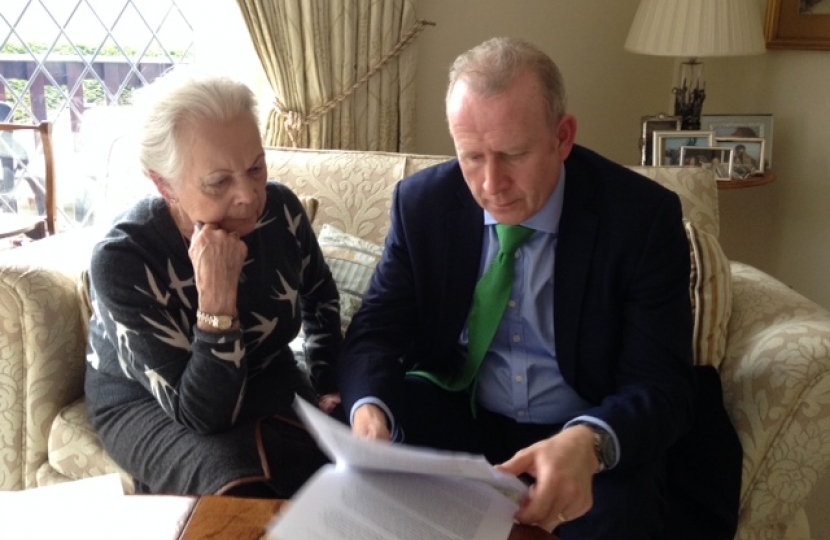 Today, Graham met with constituent, Gladys Archer. Mrs Archer approached Graham to see if he would be able to help her raise awareness about dementia sufferers when they are admitted to hospital.

"When someone who suffers from dementia," explained Mrs Archer, "needs to be admitted to hospital for an unrelated medical condition, hospitals need to be equipped with the right facilities to ensure that they can be looked after in a way that is not detrimental to their dementia."

“Being plunged into an unfamiliar and noisy environment is not at all helpful for those suffering from this brutal disease,” said Graham, “and of course hospitals are by their nature noisy and unfamiliar. What Gladys and I would like to see is the facilities in hospitals to ensure that those suffering from dementia are cared for in the best possible way. One very simple thing would be to at least allow carers to be able to stay with patients. That can be enormously reassuring to the patient and carer alike.”

Gladys explained that when her loved one was admitted to hospital she was asked to leave when visiting times were over, and had to leave him confused and unhappy in a ward where he knew nobody. “It was very worrying for me because I wanted to be there to look after and help him, but it was far worse for him,” said Gladys. “I am going to fight to raise awareness of this issue, and I am delighted that Graham is putting his full support behind it.”

If you would like to add your name to the campaign, please email graham@weavervaleconservatives.co.uk

When those with dementia are admitted to hospital with an un-related medical condition, hospitals need to be equipped with the right facilities to ensure that patient receives the best possible care.