Centenery of the Battle of the Somme 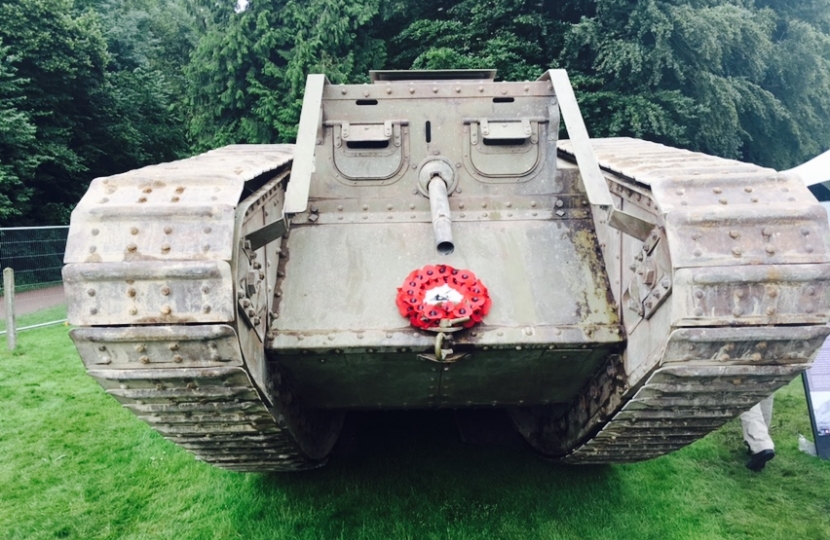 Graham’s contribution to this debate which recognised the sacrifice of those who were about to go over the top 100 years ago, is below:

I thank my right hon. Friend Mr Simpson for putting this battle into historical context as only he can. We had friends—they were the French, the Russians and the Italians. As he ably said, we were planning an attack to kick the Germans out of territories in Belgium and France. However, the Germans struck first. They took Verdun, which was critical to the French, who were being bled white. Our allies and friends called on us to join the attack, but we were not ready. The Somme was not the area or the time of our choosing, because our Army was a citizen army and only half trained. None the less, we chose to help our friends then. If we were called on today, 100 years later, to vote in this House on such action, would we as politicians go to the aid of our friends and neighbours? If members of NATO were attacked in the same way, would we go to their aid? I do not have an answer to that.

Let me go back to the Somme and how it affects our communities. If Members go to a war memorial in their constituency, they will see names such as Thomas, James, Harry and George. If they then go to their local primary school and look at the children’s coat pegs, they will see Thomas, James, Harry and George. Those forebears grew up in our communities 100 years ago. If they were here today, they would recognise those communities. It is important to remember that they were once young people who sacrificed their lives.

I have a couple of examples from Weaver Vale to read out before I give others a chance to speak. The Norley wildflower walk is about the men of Norley. Eighty-seven served in the first world war, 77 of whom did not return, which meant that 10 were killed. The community looked at where those men lived. Norley is a classic Cheshire village—a beautiful little village. People can walk around the village and see shrines made up of wild flowers commemorating those 10 men of Norley, three of whom died on the Somme. That is an indication of the significance of the Battle of the Somme. The three men were: Lance Corporal Samuel Grindlay, aged 35, who joined the East Lancashire Regiment; Private Arthur Rutter, aged 25, who joined the Manchester Regiment; and Private Edward Parrot, aged 20, who joined the Cheshire Regiment and was killed on 5 September. By coincidence, my parliamentary researcher realised that her great grandfather —a chap called Bernard Quigley—was killed in the same battle as Edward Parrot.

When I visited the Somme with my family, we tasked our children with finding Bernard Quigley’s grave. It is in the big Serre Road cemetery on the Somme. It is always sad to hear the personal stories. Bernard had three children. When he went off to fight, his wife was pregnant. She died in childbirth and the four children were orphaned. That shows the tragedy that that war brought to so many.

Todger Jones served in 1st Battalion the Cheshire Regiment. Todger was a great man, although diminutive. In photographs his rifle and bayonet look bigger than him. What did Todger do? The Germans were shooting at Todger and his comrades. Against orders, he decided to take the German sniper out. He jumped into the trench and shot three Germans very quickly, firing from the hip—he had learned to shoot his Lee-Enfield from the hip. Little did he know that there were 150 Germans; they took one look at Todger and went into their dug-out. He took 150 Germans prisoner and earned the VC.

Todger received the VC at Buckingham Palace during the first world war and went to Runcorn and told the people that he dedicated his VC to his comrades on the front line. Despite what we have said about the horror, all he wanted to do was to go back and serve on the front line. He earned a DCM for an act that, in my view, was even braver than the one for which he earned the VC. That says something about the character of the British nation. I was pleased to raise funds for a magnificent bronze statue of Todger in Runcorn.

Dan Jarvis is a good Yorkshireman. The memorial of the Serre massacre is in the Sheffield memorial park. That is a misnomer because, as the hon. Gentleman knows, it commemorates the contribution of not just Sheffield, but Barnsley, Accrington and Chorley. The 31st Division is the epitome of the service battalions, the Pals battalions, the Kitchener’s army, because the whole lot were volunteers and suffered significant casualties on the first day.

The hon. Member for Barnsley Central mentioned the Devonshire memorial. For me, there is no better place on the Somme. It is a beautiful area, but sombre if one knows the story behind it. Mansell copse is very special not just because of the Devonshires and what happened there to the 8th and 9th Devons, but because of Lieutenant William Hodgson, who was a very famous poet. He had already received the Military Cross when he looked at the area that was to be attacked on the first day and he recognised a German emplacement in an area called the shrine. In there was a German machine gun post, and he knew that that machine gun was in a position to take them out when they went over the top. He trained his men to try and take the position but, sadly, they failed.

Exactly 100 years ago, on 29 June 1916, Lieutenant Hodgson wrote a poem. He was a young man leading his men over the top on 1 July. He knew that he was going to die. To conclude my tribute to the men who fought on the Somme, I will read the poem, which is called “Before Action”:

“By all the glories of the day,

And the cool evening’s benison:

By the last sunset touch that lay

Upon the hills when day was done:

By all the days that I have lived,

Make me a soldier, Lord.

By all of all men’s hopes and fears,

And all the wonders poets sing,

The laughter of unclouded years,

And every sad and lovely thing:

By the romantic ages stored

With high endeavour that was his,

By all his mad catastrophes,

I, that on my familiar hill

A hundred of Thy sunsets spill

Their fresh and sanguine sacrifice,

Must say good-bye to all of this:—

By all delights that I shall miss,