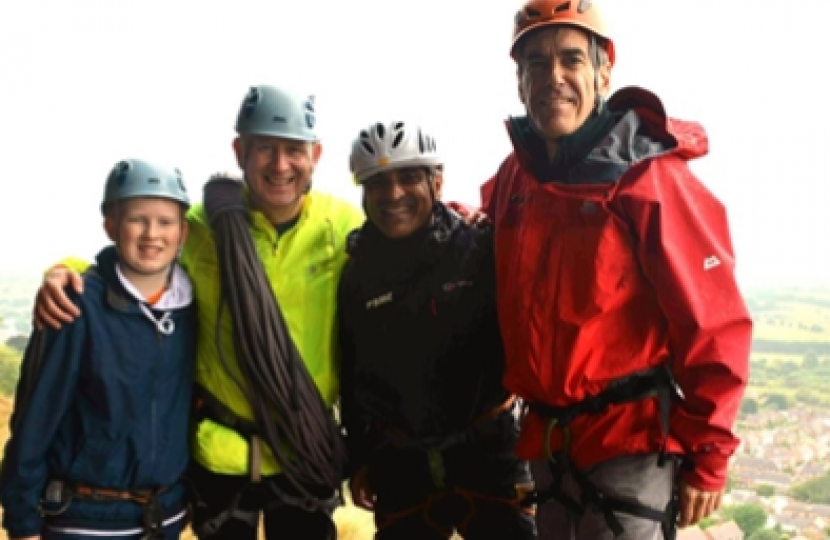 Some people believe MPs put their feet up each Summer. Whilst some MP’s may actually do this, Weaver Vale’s MP, Graham Evans is certainly not one of them! He embarks on a his Summer Tour, heading into the heart of local communities, knocking on doors (for no reason other than to say hello) and meeting the people who matter most – local residents.

10th July: Graham formally opened the outdoor play area at Kingsley Community Primary and Nursery School before heading to one of his regular Help and Advice Surgeries in Helsby.

12th July: Heading off on the inaugural Wildflower Walk in Norley, a walk designed to commemorate those from Norley who served in the Great War.

14th August: Abseiled off Helsby cliff to promote the benefits of outdoor recreation.

In addition to these more public engagements Graham has also held many meetings over the summer about various local issues and concerns including meeting with: the Chief Executive of Weaver Vale Housing Trust, Age UK, The Prince’s Trust Team in Halton, the Chair of Merseytravel about the Halton Curve, Mid Cheshire Hospital NHS Foundation Trust and the Chief Ombundsman of Obundsman Services.

Graham’s Summer Tour will be returning in July/August 2016; if you would like the team to visit your area or even to hold a special open surgery in your community, please do get in touch. Thank you!