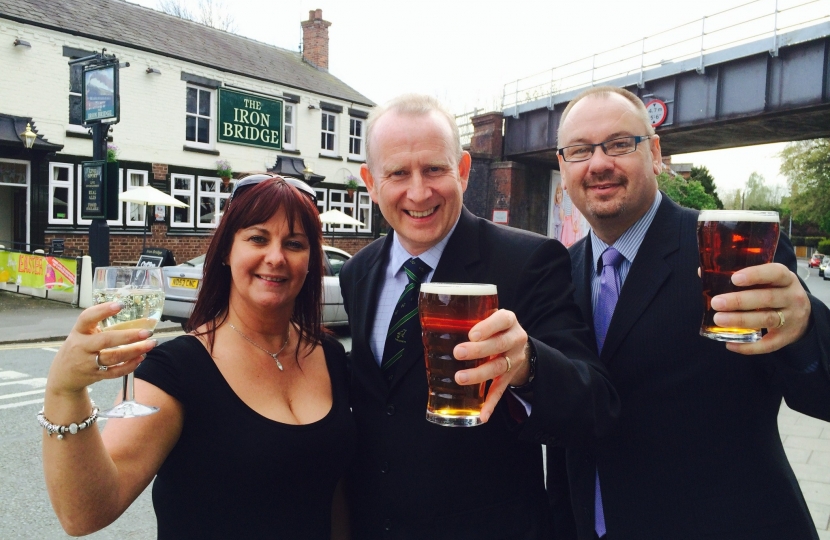 THE MP for Weaver Vale has toasted a new £1.5m fund which will empower local residents to take control of at-risk pubs.

The new ‘Pub Loan Fund’, will help community groups take over the running of their much-loved local, by providing small loans to start feasibility work, pay for lawyers’ fees or get materials for refurbishment.

This new fund, which was launched on 11th September, by Community Pubs Minister, Marcus Jones builds on a number of measures introduced by the government to help support the great British pub, having already abolished the unpopular beer and alcohol duty escalators, cutting business taxes and giving communities a fairer chance to prepare to buy community buildings through Community Right to Bid.

Graham, who is a big supporter of local pubs, having campaigned for a cut in beer duty, said he was delighted with the plans.

“The traditional British pub is at the heart of the community and something that should be protected. I ran a successful campaign on beer duty, so was delighted when the Chancellor announced that it would be cut by 1p. The ‘Pub Loan Fund’ is another fantastic idea and something I would support Weaver Vale residents in, if they wished to get involved.”

“British pubs support thousands of jobs across all areas of the country, boosting the economy by £21 billion a year. Now we’re giving our communities the chance to be at the heart of their local with the support they need to put their plans for running a pub into action."