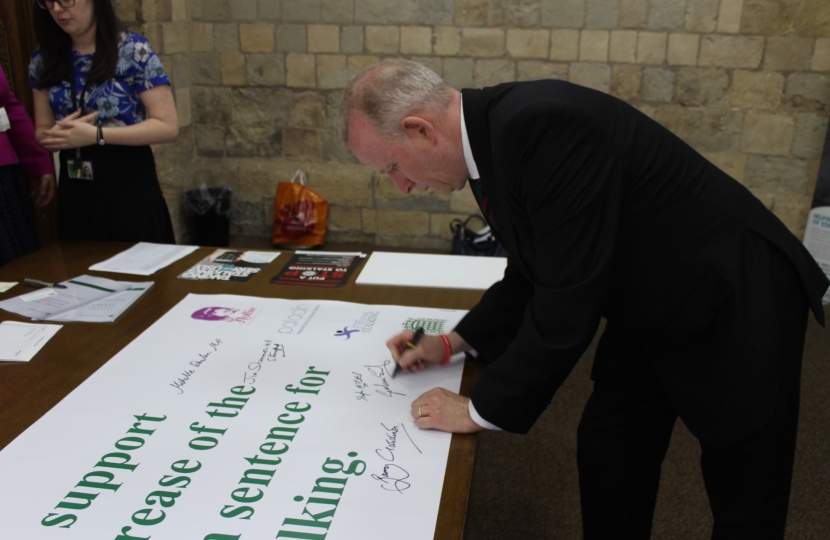 Graham Evans MP for Weaver Vale has pledged his support for victims of stalking in Parliament during National Stalking Awareness Week with Suzy Lamplugh Trust.

National Stalking Awareness Week is an annual, national event which aims to broadly raise awareness of the dangers of stalking. This year, National Stalking Week is taking place from 18th-24th April. Stalking will affect one in five women and one in ten men in their lifetimes , and of all domestic homicides 40% of the victims were stalked prior to death , so it is vital to raise awareness of the dangers associated with this behaviour.

Graham joined Suzy Lamplugh Trust in Parliament this week to show concern and support for survivors of stalking. The event was hosted by Alex Chalk, MP for Cheltenham, and Richard Graham, MP for Gloucester, as part of their campaign to increase the maximum sentence for stalking from five to ten years’ imprisonment.

Speaking on the dangers of stalking, Rachel Griffin, Director of Suzy Lamplugh Trust stated: ‘Stalking is a hidden crime in our community. There are very few stalking-specific support services and those that are available are stretched to their limits. Stalking has a devastating impact on the life of the victim and their loved ones. There needs to be more support for victims so that they can be safer and feel safer.’

Graham said of the event, ‘Stalking matters, and I hope that events such as this will raise awareness of the genuine threat posed by stalking behaviours. Cheshire Police report that more incidents are being reported to them which is encouraging, but many are still not reported to the police. I hope this awareness campaign will help victims come forward and seek help. I pledged my support for survivors to show that I and Weaver Vale stand with them, and that they are not alone.’

Alex Chalk MP and Richard Graham MP added, ‘stalking is a serious crime which ruins the lives of not just victims, but also the lives of their friends and family. We’re campaigning to increase the maximum sentence for stalking from five years’ to ten years’ imprisonment- to more than you can get for stealing a chocolate bar. It is time for the punishment to fit the crime, and we are delighted to have Graham' support.’

If you have been affected by stalking, please call the National Stalking Helpline on 0808 802 0300 for advice and support.