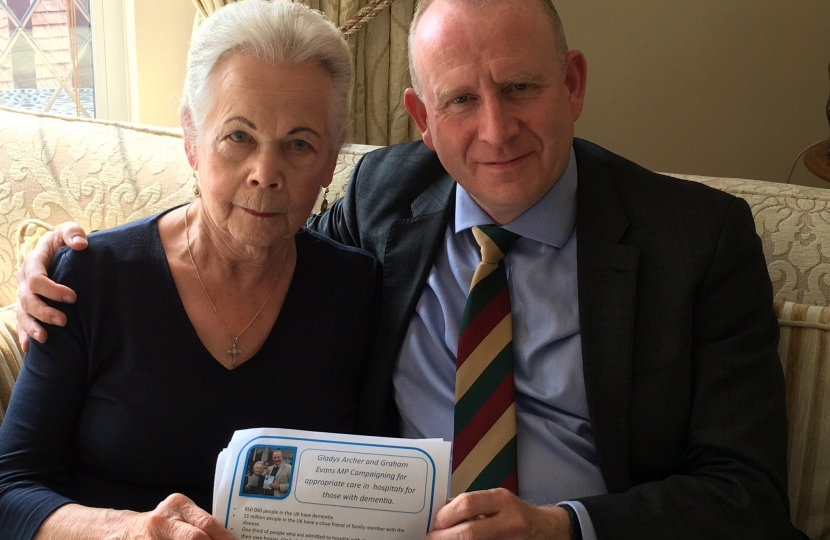 Many of you will know, I have been very proud to work to work alongside the incredible Gladys Archer in her campaign for appropriate care in hospitals for those with dementia. Due to the nature of this cruel disease, those having to be admitted into hospital need to be treated appropriately ie avoiding busy noisy general wards which will in many cases make their condition worse. One third of those with dementia admitted to hospital never return home, Gladys’s husband is one of them.

At the weekend Gladys’s campaign was voted on by thousands of WI members at their Annual General Meeting, and with overwhelming support it was carried. This means that the campaign for appropriate care in hospitals for those with dementia will form an official mandate for the WI and be the basis of campaigning activities for the years ahead.

The WI has a long history of campaigning - in 1975 they started to lobby government to set up breast screening clinics (a national screening programme was established in 1986), as early as 1964 they passed a resolution on the dangers of smoking and stated a wish to ban it in public places, their 1954 resolution was about protecting the countryside from litter and led to the foundation of Keep Britain Tidy, and it was the WI who campaigned for parents of children admitted to hospital to be allowed to stay with them.

This a huge step forward in the campaign and a testament to Gladys’s incredible drive and commitment – well done Gladys and Congratulations!!

When those with dementia are admitted to hospital with an un-related medical condition, hospitals need to be equipped with the right facilities to ensure that patient receives the best possible care.